see where we've been and where we're going 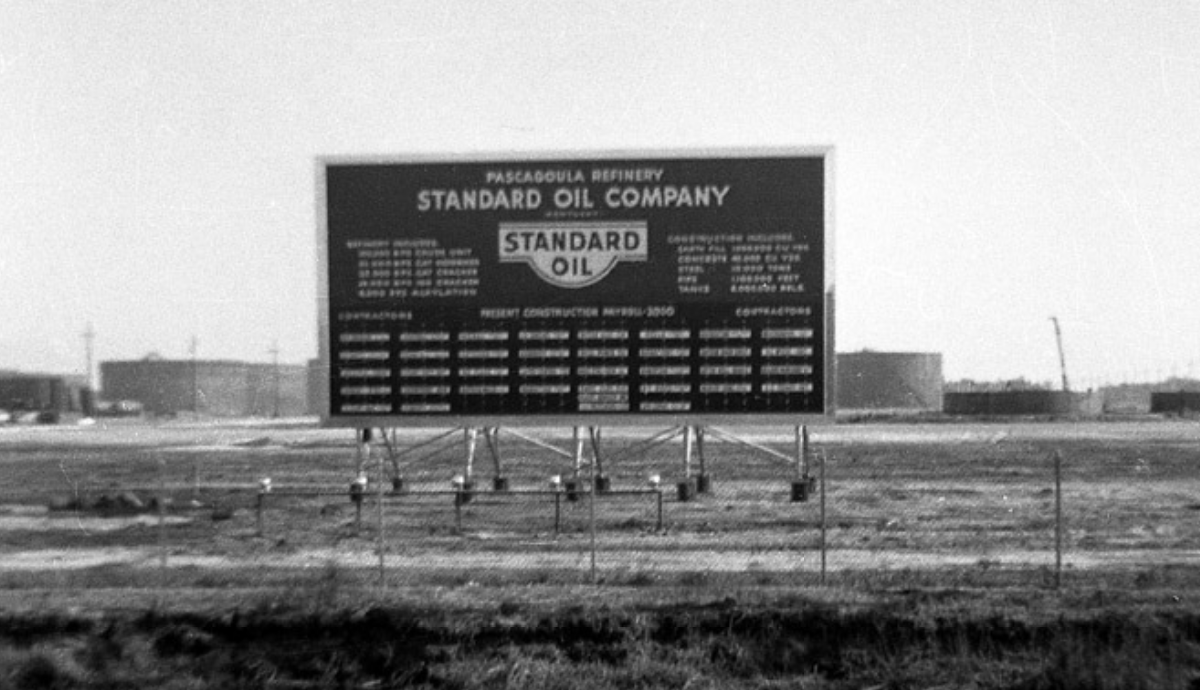 Since operations at the refinery began in 1963, Chevron has continued to invest in its Pascagoula facility and in Jackson County.

Sprawled over 2,700 acres, Standard Oil of Kentucky’s new 100,000-barrel-a-day Pascagoula refinery became the biggest and most modern refinery in the industry. A groundbreaking ceremony in Nov. 1963 celebrated the $100 million investment in Jackson County.

Standard Oil of Kentucky held groundbreaking ceremonies for the Pascagoula Refinery on November 8, 1961. Operation of the original $103 million facility began on October 30, 1963, processing 100,000 barrels of crude oil per day. Today, the refinery processes 350,000 barrels of crude oil per day. The original refinery consisted of a Crude Unit, a Hydrocracking Unit, a Fluid Catalytic Conversion (FCC) Unit, a Reformer Unit, a Hydrogen Plant, an Alkylation Plant, and several Utility plants.

In 1966, a $54 million project added a Paraxylene Unit to produce the chemical used in the textile and plastics industries, and an Ammonia Plant, which has since been shutdown and dismantled.

In 1980, Chevron Corporation began one of its largest projects ever when it invested $1.3 billion in the Pascagoula Residuum Conversion Project, an expansion that allows the refinery to transform lower-grade crude oil into quality products. Completed in 1983, the project added the following units: a Coking plant that’s called the Coker Unit, a Residuum Desulfurization (RDS) unit, another Alkylation Plant, another Hydrogen Plant, a Coker Hydrodenitrification (HDN) unit, three Sulfur/Tail Gas Unit Plants, and converted the FCC Feed Hydrotreater to a Diesel Hydrotreater.

A technician in the Coker control room monitored operations of the unit, which was installed as a major part of the 1983 Pascagoula Residuum Conversion Project.

With the 1992 construction of the $200 million Aromax® Unit, the Pascagoula Refinery began producing benzene, the primary building block for such products as automobile tires, sporting goods, nylon and pharmaceuticals.

In 1996, construction of the $240 million PX Expansion/EB Project doubled the refinery’s capacity to produce paraxylene (PX), and added facilities to produce ethylbenzene (EB), a chemical feedstock.

In January 2002, Chevron began construction of a $150 million expansion project at the Pascagoula Refinery to produce low-sulfur gasoline and diesel. The Clean Fuels Project, which was completed in 2003, added a new low pressure vacuum column at the Crude I Unit and modified the Crude II Unit and the VDU (Vacuum Distillation Unit) to provide heavier feed to the Coker Unit; replaced six petroleum coke drums with larger capacity drums and replaced the wet-gas compressor at the Coker Unit; reconfigured the Coker HDN (Hydrodenitrification) Unit), that previously treated FCC feed, to a diesel treating plant; and reconfigured the RDS Unit, which previously provided feed to the Coker Unit, to pre-treat feed going to the FCC Unit. Additional modifications were made to support facilities such as new feed pumps and conveyor modifications at the Blending and Shipping Areas, and compressor modifications at the Water Treating Plant.

The Pascagoula Refinery began construction on the FCC Project in 2005. The $150 million project, completed in late 2006, increased the Refinery’s gasoline production by roughly 10 percent to about 5.5 million gallons per day.

Refinery employees gathered to witness the arrival of the massive new fractionator at the shipping docks. The 175-foot column inched along Highway 611 before arriving at its final destination in the Cracking I unit.

In 2010, Chevron completed construction of a major gasoline production unit at its refinery in Pascagoula. The new CCR unit increased gasoline production at the refinery by approximately 10 percent, or about 600,000 gallons per day. The CCR unit with updated refinery technology replaced two process units constructed more than 30 years ago.

In 2014, Chevron completed the Pascagoula Base Oil Plant. The new addition to the refinery produces premium base oils, which are used in high-performance lubricants, including motor oils for consumer and commercial uses. Construction included adding two new berths to the Chevron wharf, 16 new product tanks, new railcar capabilities and more.

Completion of the Pascagoula Base Oil Project positioned Chevron as a leading producer of premium base oils in the world.